A number of new tools, forks, services and products emulating our efforts have been appearing casting some shadows and doubts on the future of our project. Fear not, we are as committed as ever to produce one of the best free software resources to the malware research community.

We're here to stay, and here's the proof of that. Cuckoo Sandbox 1.2 is now available for download! Visit the Download page, get your copy, read the documentation, and fire it up.

This release's changelog is one of the longest so far, and it includes numerous new features that have been requested by our users for a long time, including for example support for bare-metal and XenServer analysis, respectively contributed by MITRE and Adam Meily. In Cuckoo Sandbox 1.2 we are also supporting Volatility 2.4 and improved the results generated by the integration of the two tools. We see in Cuckoo and Volatility two irreplaceable tools in a malware analyst's arsenal, and we invite you all to research into additional ways to enhance their integration.

Many improvements were made to the Django-based web interface, which has most certainly become the primary and most recommended way to consume the results of Cuckoo Sandbox analyses.

Thanks to Gael Muller, from Cuckoo Sandbox 1.2 you are now able to search within the behavior of the selected analysis and extract all the API calls matching the given pattern across all monitored processes:

Cuckoo's network analysis is still far from perfect and we are working to improve it. Version 1.2 already includes some interesting improvements, including for example the ability to collect all TCP and UDP streams and inspect the full hex dump of their content: 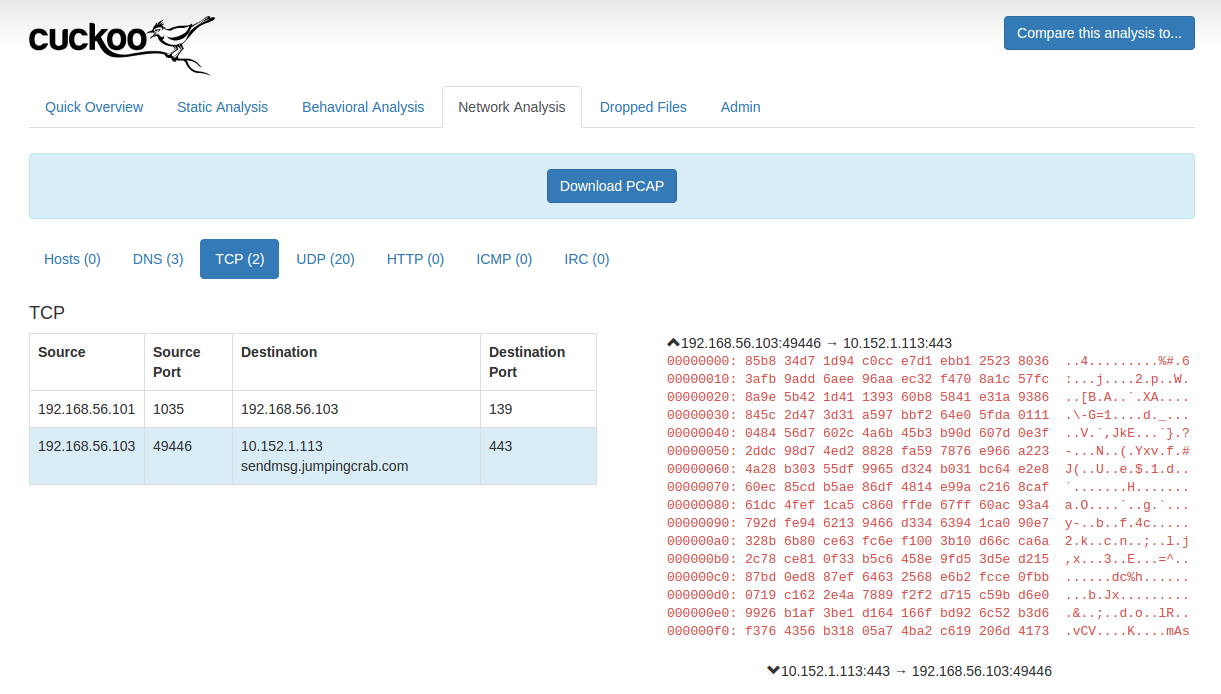 As malware analysts we are often in need of comparing the execution of different malware samples to estimate their degree of similarity. Similarly, it is useful sometimes to be able to compare the analysis of the same samples but on different systems, for example Windows XP and Windows 7, to verify whether they take different execution paths.

We wanted to have this capability in Cuckoo Sandbox for a long time, and in one of our latest additions we started layed the foundation for what we refer to as comparative analysis . Starting from an analysis report, you are now able to select other analysis for the same files or analysis of different files and initiate a comparison:

Currently the content of the comparative analysis is limited and it just portrays a graphical representation of the category of events executed by the malware in the two analyses:

While this is useful to get an high level idea on the level of similarity between them, we want to see the comparative analysis grow to become a sophisticated and irreplaceable tool for malware analysts to facilitate their work and make a better use of Cuckoo Sandbox reports.

If you have ideas on how to expand this, please send us feedback, suggestions and code.

Following is the full CHANGELOG for this version: