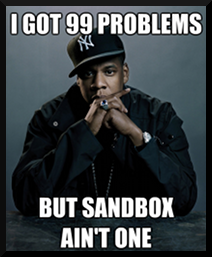 Ok, the image above is inaccurate: we have 99 problems and Cuckoo amounts most of them... BUT! We finally took a whole bunch of them off of our back with this new shiny hatching of our sandbox. Ladies and nerds, Cuckoo Sandbox 0.6 is here!

This release represents a major step forward for the quality of the project: you won't find an endless list of new features this time, but a handful of solid improvements that should make your experience with sandboxing much more pleasant.

Along with a few smaller additions, the focus of 0.6 revolves around the introduction of network logging. Until now the retrieval of the analysis results from the analysis machines happened through an inefficient and resource-expensive XMLRPC transaction. With Cuckoo Sandbox 0.6 we are now able to collect behavioral logs, dropped files, screenshots and memory dumps in real-time from the analysis machines through the use of what it's been called ResultServer.

The advantages of this approach are multiple:

Following is the CHANGELOG for this version:

Unfortunately, it's not all flowers and butterflies. We do have some issues that we are trying to address.

First thing first, we are working hard on isolating some stability issues with our CuckooMon analysis core. For some mysterious reason that we haven't been able to understand yet, some hooks we install on few Windows API hooks result in some issues that could affect the stability of the malware execution. As a temporary workaround, we disabled hooks for NtOpenProcess, NtClose, NtAllocateVirtualMemory and VirtualFreeEx. This should likely allow most malware to continue flawlessly with their execution, but unfortunately you won't be able to see logs for those calls.

Secondly, several users reported some issues on the overal stability with the management of the virtual machines under an heavy and continuous load of submissions. We haven't been able to replicate the problem yet, but we are actively investigating this. You can probably expect some fix in the next bugfix release or in the next stable version at last.

We are really happy with this release and we hope you will be as well. Please remember that this is a spare time effort, so any valuable contribution from the community is very welcome!

That's it for 0.6! Stay tuned for upcoming developments on the next release to come (might it finally be 1.0? WOOTWOOT).